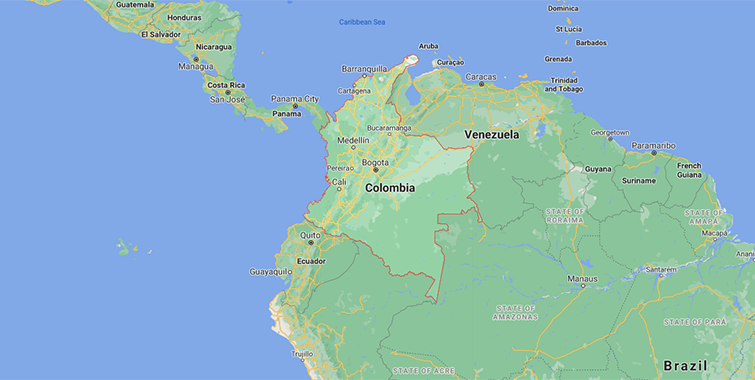 Andean Mining’s El Dovio “VMS” project is located in the Municipality of El Dovio, Department of Valle Del Cauca in central west Colombia. The VMS hosted copper and gold mineralisation is located within a belt of mafic volcanics that stretches for some 800km north south along the eastern limb of the western cordelliera in Colombia, and within which several sediment hosted VMS systems are formed. Large tracts of the Colombian cordelliera remain underexplored due to Colombia’s history of conflict. 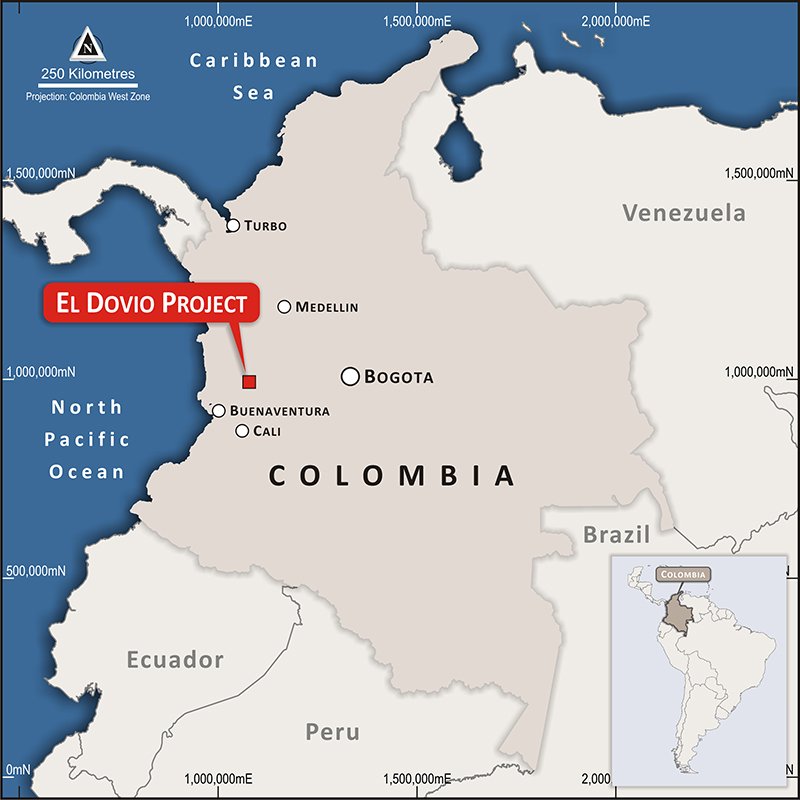 The El Dovio property hosts high grade polymetallic gold-silver-copper-zinc mineralization with grades to 104 grams gold per tonne and 17% copper hosted within a boiling “feeder zone” believed to underlie a Volcanogenic Massive Sulfide (VMS) target in an extensive belt of metamorphosed marine volcanosedimentary rocks known to host other polymetallic and (VMS) prospects and mines throughout western Colombia, Ecuador and beyond.

Work to date indicates a deposit with high unit value, exceptional metallurgical characteristics and low price sensitivity. Work by Newrange Gold Corp of Canada (Newrange) materially expanded the strike of known mineralization at El Dovio and identified a zone hosting high grade polymetallic mineralization ranging from 10 to 68 meters wide in outcrop and approximately 1 kilometer long that has locally been traced down dip more than 200 meters below outcrop with diamond drilling.

The Fraser Institute Annual Survey of Mining Companies 2020 investment attractiveness index rated Colombia the most attractive mining destination country in Latin America ahead of both Chile and Peru. Colombia also ranked 13th globally in the “Best Practices Mineral Potential Index” which ranks a jurisdiction’s “pure” mineral potential, since it assumes a “best practices” policy regime. Colombia was the second highest ranked country behind only Turkey and some individual states or territories in Canada, Australia and the USA.

The economy of Colombia is the fourth largest in Latin America as measured by gross domestic product. Colombia has experienced a historic economic boom over the last decade. Throughout the 20th century Colombia was Latin America’s 4th and 3rd largest economy GDP and between 2012-2014 it became the 3rd largest in Latin America (nominal) GDP. As of 2018 the GDP per capita has increased to over US$14,000, and GDP increased from US$250 billion in 1990 to nearly US$800 billion. Poverty levels were as high as 65% in 1990, but decreased to under 30% by 2014.

Modern industries like shipbuilding, electronics, automobile, tourism, construction, and mining, grew dramatically during the 2000s and 2010s, however, most of Colombia’s exports are still commodity-based. Colombia is Latin America’s 2nd-largest producer of domestically-made electronics and appliances only behind Mexico. Colombia had the fastest growing major economy in the western world in 2014, behind only China worldwide.

About the El Dovio Copper-Gold Project

The El Dovio project is situated in the western range of the Colombian Andes at an elevation of approximately 1,400 meters. The El Dovio mineral licenses are 100% owned by CMC, covering more than 1,200 hectares.

Outcropping mineralization in what is now known as the Sabana Blanca zone was first discovered in 1974 but lack of access prevented exploration until the 1980’s when a road was built to the nearby hamlet of Lituania. In 1988 a short exploration adit was driven on high grade mineralization in Quebrada Soberana (Soberana Creek). 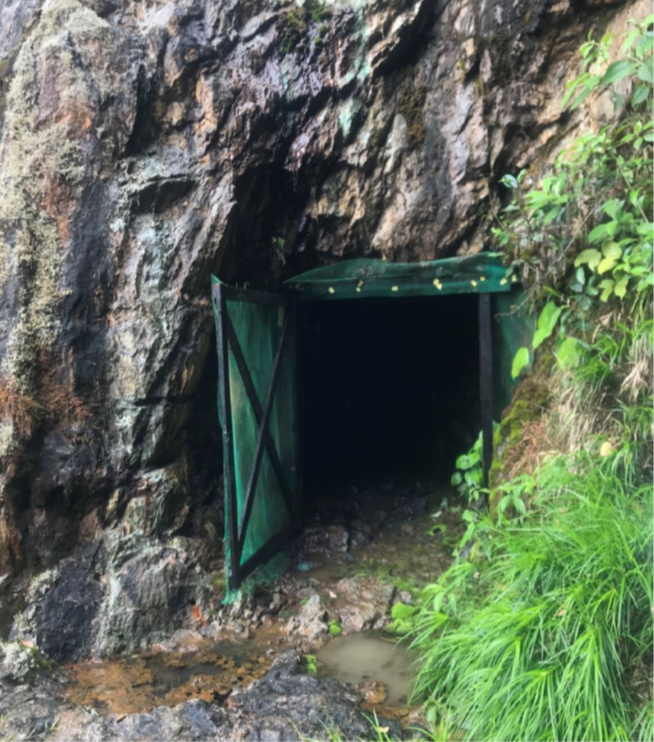 Between 1991 and 1993, 691 meters of small diameter core was drilled in 15 shallow holes. Less than 41 meters of that core was ever assayed. That work returned values averaging 5.05 g/t gold, 24.1 g/t silver, 2.14% copper and 2.00% zinc, over widths ranging from three to fifteen meters in surface, underground and drill exposures.

Work by CMC from 2009 to 2014 expanded on these results with geological mapping, geochemical and geophysical surveys and diamond core drilling. This work traced mineralization in the feeder or “stringer” zone for approximately one kilometer along strike and has identified a highly prospective bedded sulfide horizon at the Brazo 1 target zone. 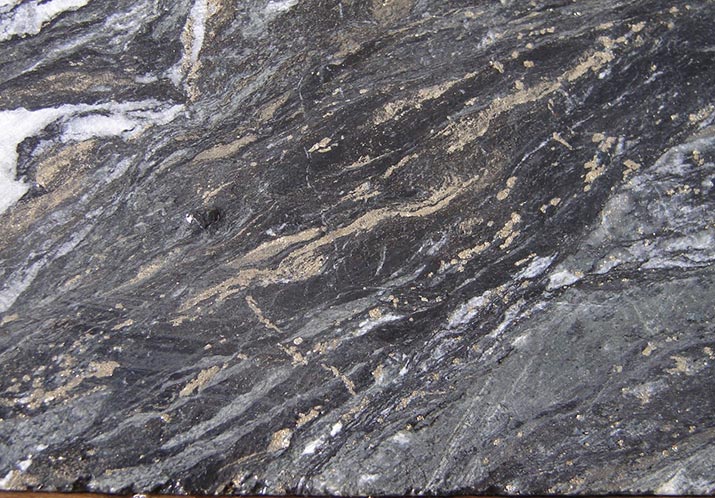 Each branch of the northern Andes is characterised by its own tectonic history, linked to interactions between the Caribbean, Nazca, and South American plates. These interactions resulted in complex combinations of subduction, magmatism, terrane accretion, thrusting, and uplift as well as local extension and formation of foreland basins. Based on the geological history, it has been postulated that several terranes accreted episodically to the South American continent between the Cretaceous and the Miocene. 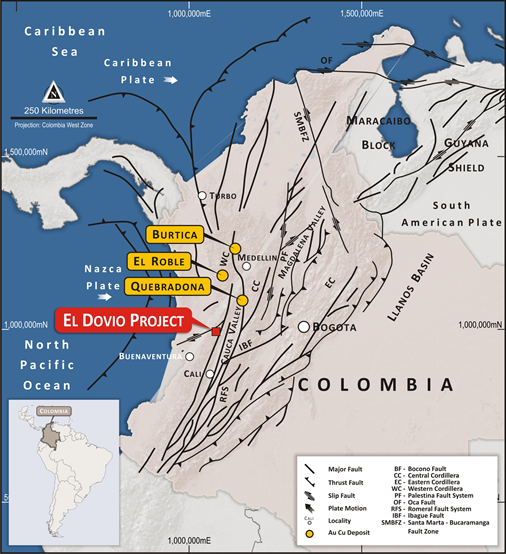 Mineralization at El Dovio occurs within a north-northeasterly trending belt of Cretaceous aged, volcano-sedimentary rocks termed the Cañasgordas Group, in a metallogenic belt more than 800 kilometers long known to host a number of gold-bearing polymetallic and VMS deposits.

The Cañasgordas Group is composed dominantly of thoelitic basalts, andesites and diabase referred to as the Barroso Formation interbedded with sedimentary units composed of mudstone, shale, sandstone, greywacke, chert and minor limestone. 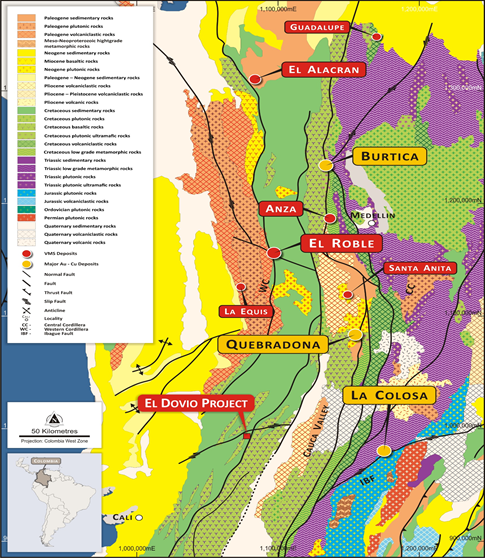 High grade mineralization at El Dovio occurs as structurally controlled veins surrounded by broad zones of stockwork mineralization within metamorphosed mafic volcanic rocks. This style of mineralization is characteristic of the stringer zones known to occur beneath VMS systems. 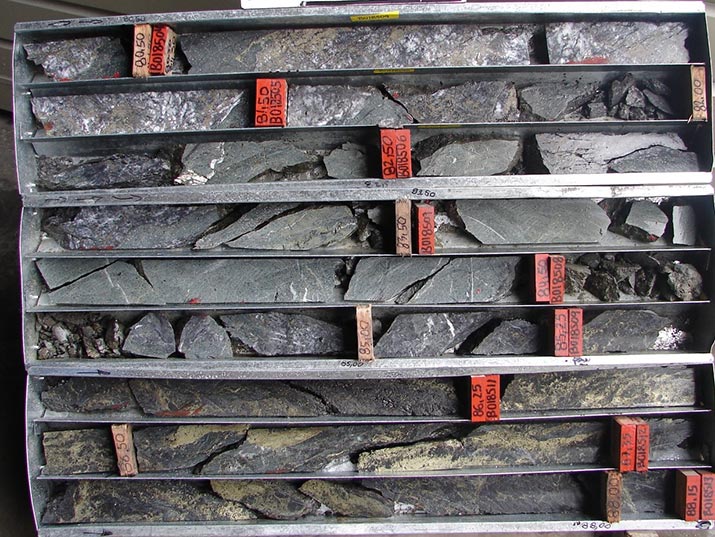 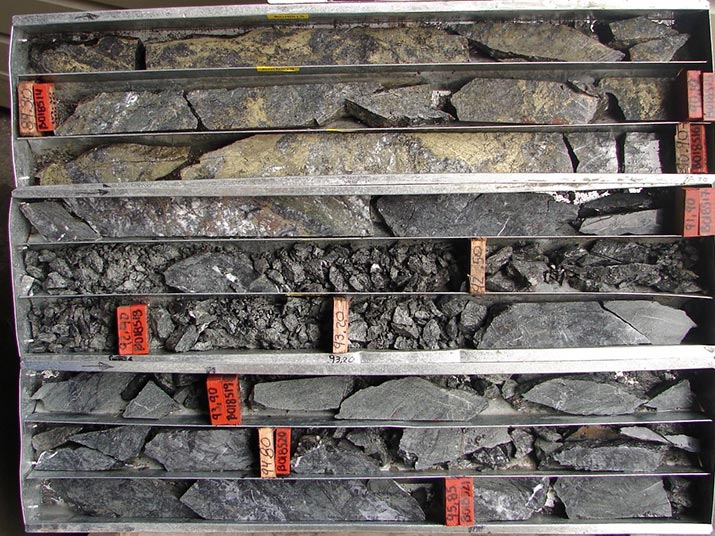 Trenching and sampling has also identified mineralisation at the Granizales, Sopatrana, Silencio and Brazo 1 zones which require follow up surface exploration and diamond drilling. 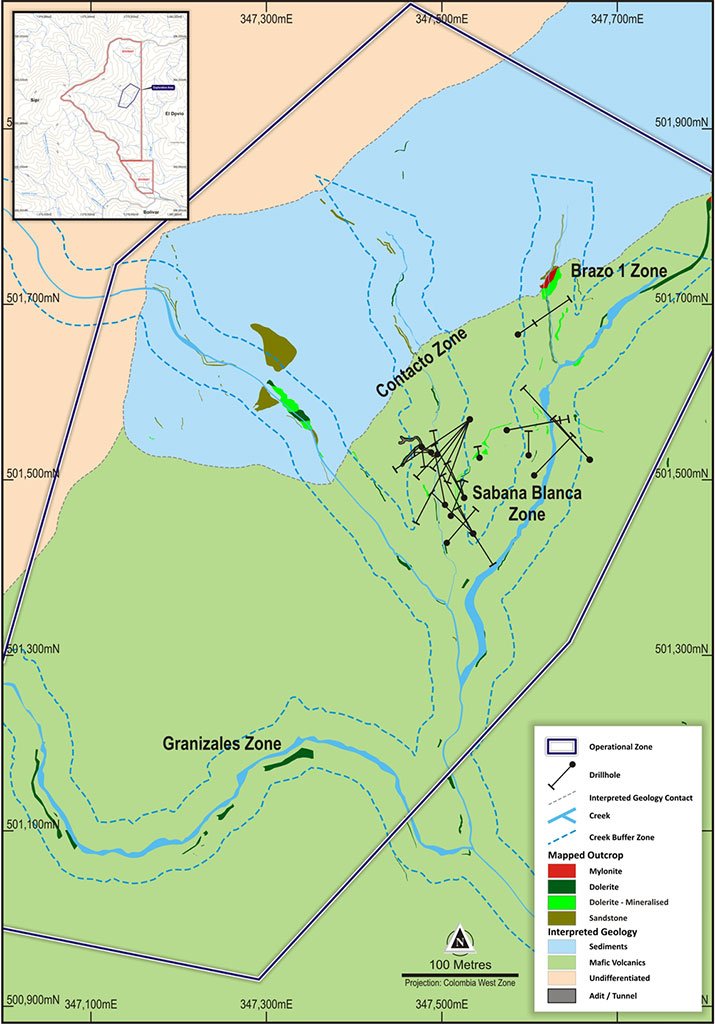 Exploration results to date indicate potential for an underground, high grade, low cost mine using adit access, mechanised stoping and ore extraction via gravity. Andean propose to use dry tailings stacking which is an accepted practice in Colombia and is the preferred tailings management system in Colombia. Andean Mining’s strategy is to target a 1,000 tpd operation with expected CAPEX of US$50-US$70m. 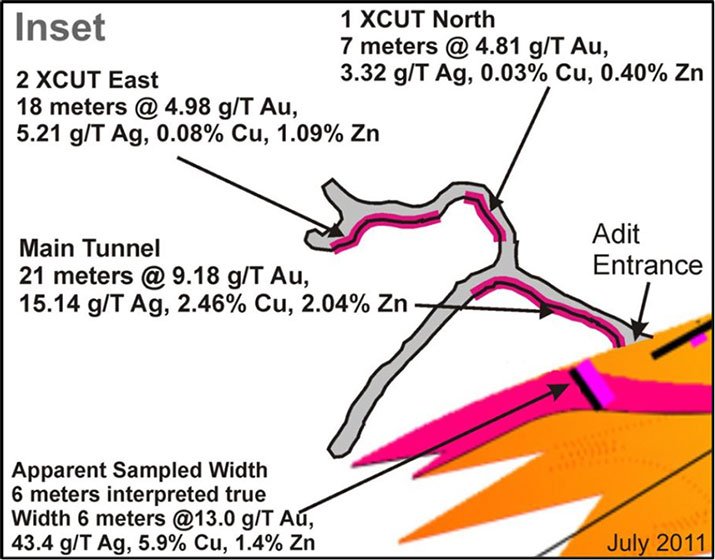 There is potential for a larger tonnage project mining lower grade halo around high grade mineralisation.

Andean Mining’s immediate exploration strategy is to undertake in-fill and extension drilling on the Sabana Blanca zone with a view to determining a maiden JORC resource within 2 years of listing and continue exploration at the other known mineralised occurrences at Sopatrana, Silencio, Granizales and Brazo 1.

Andean Mining completed a scoping level study on a bulk sample taken from the adit at Sabana Blanca. The study aim was to complete differential rougher and cleaner flotation testing to produce separate copper and zinc concentrates from the massive sulfide polymetallic ore. Comminution testing was also completed to provided data for crushing and grinding circuit design. This testing set out to establish a flow sheet that can be used to test variability samples and estimate metal recovery and grade.

The composite sample received by the laboratory on Denver, Colorado, contained high levels of gold and copper. The sample assayed 16.4 g/mt Au, 32 g/mt Ag, 6.4% Cu, 0.9% Zn and 11.2% STotal. The sample is a massive sulfide with most of the sulfur present as sulfide sulfur. The majority of the sulfides are in the form of chalcopyrite and pyrite, with lower amounts of pyrrhotite and sphalerite. The head assay values and the XRD results were in good agreement.

A Bond’s Ball Mill Work Index (BWi) was determined for the supplied sample at a closed size of 100 mesh (150 microns). The work index of the sample was 15.55 kWh/st. The results indicate that the sample would be considered hard.

A Bond Abrasion Index (Ai) was determined for the supplied sample. The abrasion index of the sample was 0.798. The results indicate that the sample would be considered abrasive.

A Crusher Work Index (CWi) was determined for the supplied sample. The crusher index of the sample was 12.2 kWh/st. The results indicate that the sample would be considered medium hardness.

The differential flotation approach floated nearly all of the metals contained in the sample. Each individual metal recovery was generally around 95% once all concentrates were combined, which is consistent with previous bulk flotation results conducted by Newrange.

About Us
Get in touch
Use the form below to leave us a message and we'll get back to you.
Go to Top