Andean Mining holds a portfolio of exploration and development projects through it’s wholly owned Colombian subsidiary Corporacion Minera de Colombia SAS (CMC). CMC holds 2 granted licences at El Dovio and 2 licence applications located on the same geological trend as El Dovio covering an area of approximately 3,031 ha. The Projects are situated in central west Colombia on the western flank of the western cordillera and are prospective for copper-gold-silver and zinc. The Company’s main activities are currently focused on exploration and development at its El Dovio copper-gold-silver-zinc Volcanogenic Massive Sulphide (VMS) project. 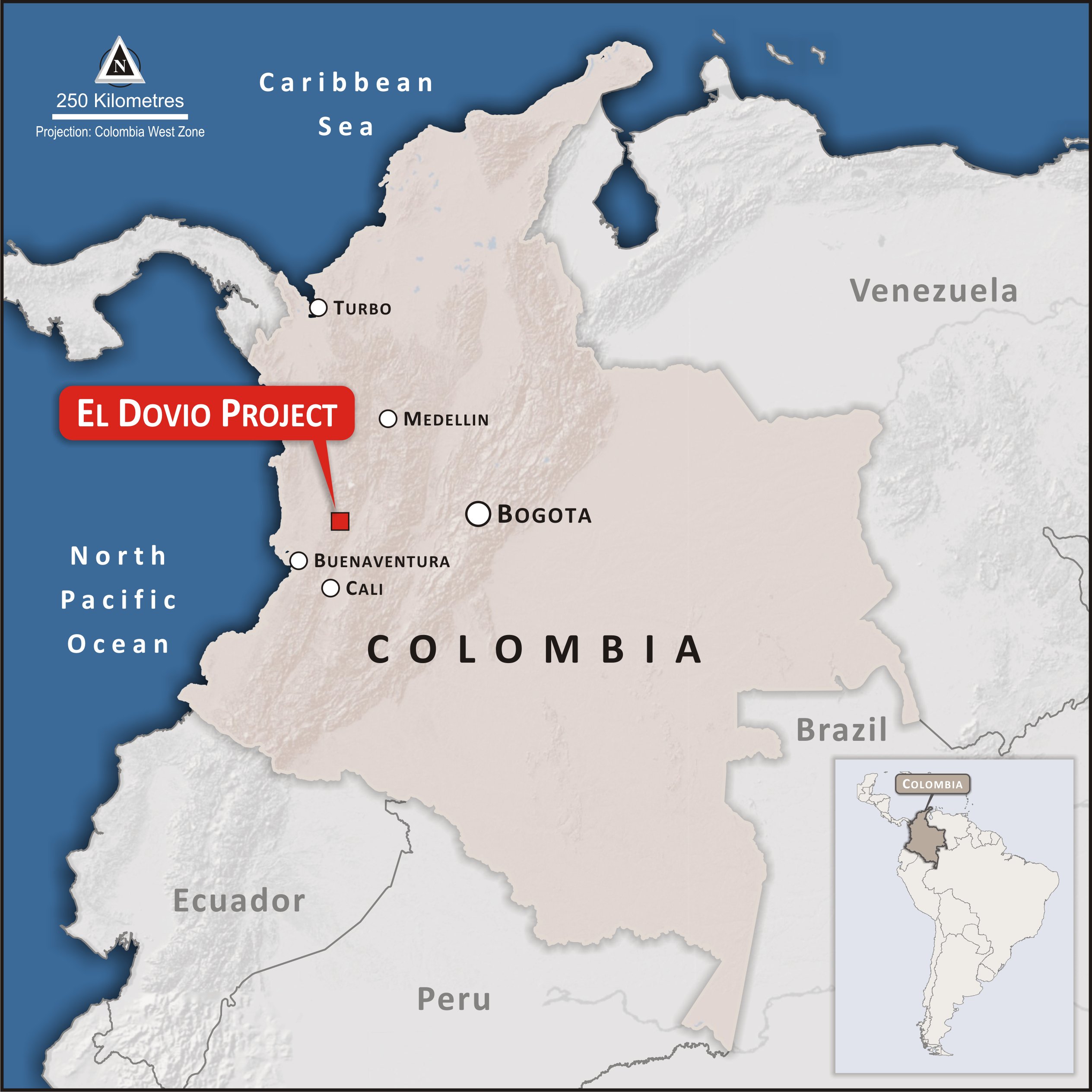 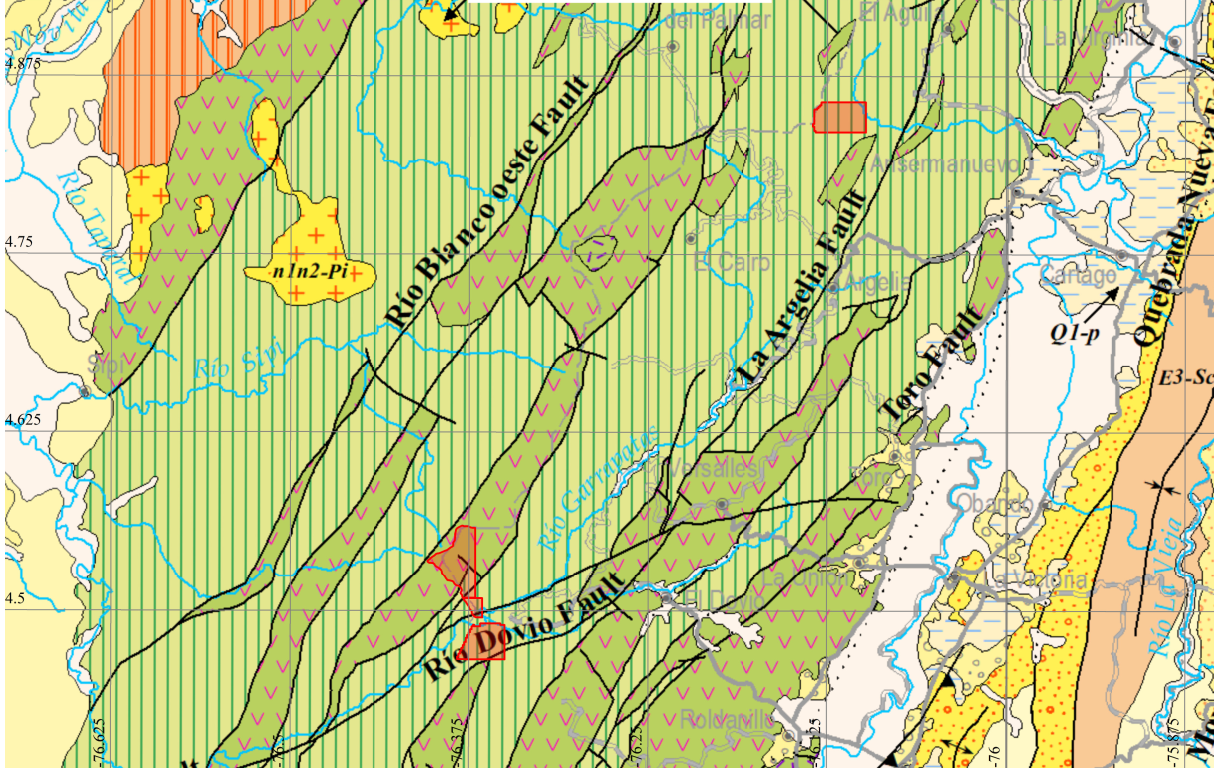 The El Dovio property hosts high grade polymetallic copper-gold-silver-zinc mineralisation with grades up to 17% copper and 104 g/t gold hosted within a volcanogenic massive sulphide (VMS) target in an extensive belt known to host other polymetallic and VMS prospects and mines throughout western Colombia, Ecuador and beyond.

Work to date indicates a deposit with high unit value, exceptional metallurgical characteristics and low price sensitivity. Work by Newrange materially expanded the strike of known mineralisation at El Dovio and identified a stockwork zone hosting high grade mineralisation ranging from 10 to 68 metres wide in outcrop and approximately 1 kilometre long that has locally been traced down dip more than 200 metres below outcrop with diamond drilling. Mineralisation remains open to additional extension on both strike and at depth.

The projects are summarized below: 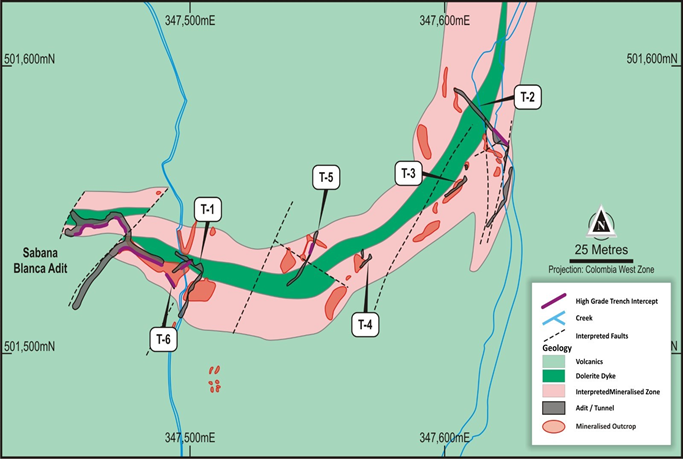 The high grade copper-gold El Roble deposit is currently producing at 900 tonnes per day from an underground mine where current reserves plus historical mined tonnes total 3.89Mt at 2.77% Cu and 2.44g/t Au.

Underground development on the Sabana Blanca zone together with extensive surface trenching and diamond drilling have consistently intersected a mineralised “VMS” stockwork system between 10 and 68m wide that is host to high grade, steeply plunging lenses between 3 and 6m in width.

Andean have completed detailed metallurgical testwork from an underground bulk sample in the USA with very high recoveries (>95%) for all metals into separate copper and zinc concentrates.

Andean will complete an aggressive in-fill and step out diamond drilling program on the Sabana Blanca zone with a goal of completing a maiden resource estimate and scoping study within the next 2 years.

Underground development, surface exploration including geochemistry, geophysics, surface trenching, geological mapping and diamond drilling have all contributed to the understanding of El Dovio where several zones of mineralisation have been identified, with the Sabana Blanca zone the focus of most of the work to date.

The El Dovio exploration program will include a multi-disciplinary exploration program across the entire El Dovio property with the aim of identifying additional anomalism and geological indications of VMS mineralisation hosted by the prospective Cretaceous units which underly the area. Exploration will include, geological mapping, surface geochemical sampling, trenching, detailed geophysical surveys including a gravity survey, helicopter borne magnetic survey and an IP-Das survey.

The Company has designed a detailed 3D modelled in-fill and step out diamond drilling program over the Sabana Blanca zone where the Company’s goal is to generate a maiden resource estimate and complete a scoping study within 2 years of listing. Drilling on the Brazo 1, Granizales and Contacto zones has also been planned.

About Us
Go to Top